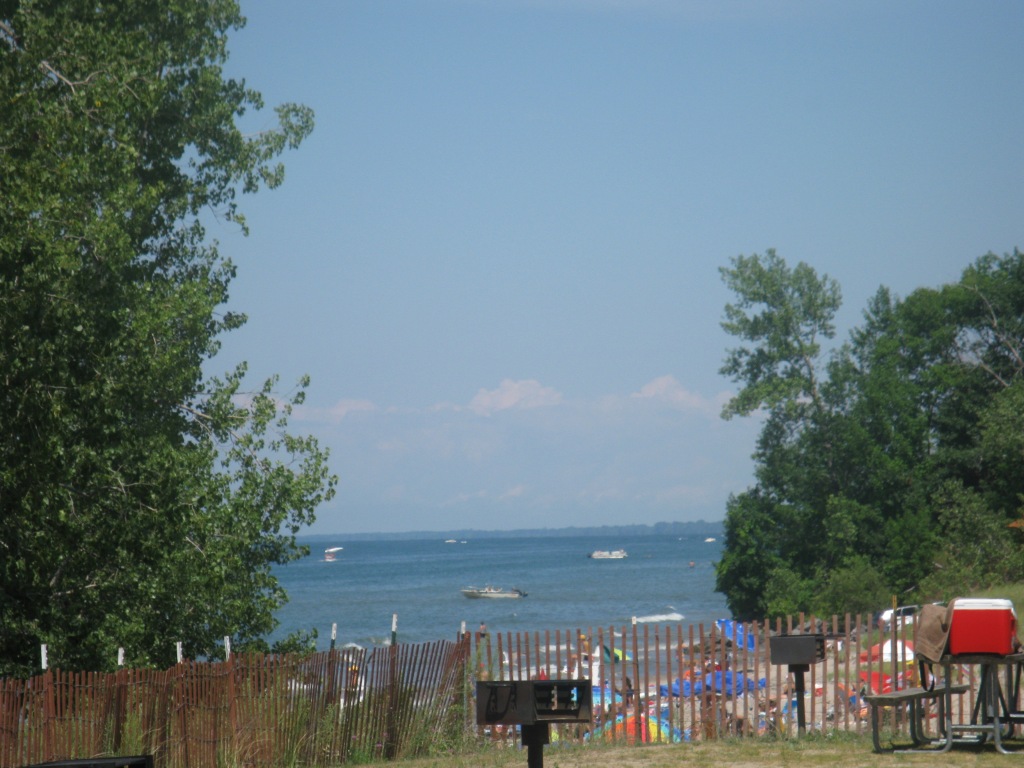 Not the best picture, but it had beautiful scenery, wildlife, wildflowers, clean facilities, good looking lifeguards, best weather, great lakes breeze, perfect water temp, boardwalk with railing, and the State Park was small but not overcrowded.

It was fun to be with friendly people, mostly in my age group, all that wanted to be there. Four of of us played Bocce ball, it was a riot. It was another first for me, i never ever have seen bocce up close. It was easier than bowling for a gimpy type like me. I think I have the rules down now, but I was getting very tired towards the end of the third game.

I went into the lake twice. The water was perfect, no need to acclimate for long. It was a bit of a challenge getting in and out with my ankle and balance problems. The waves were strong enough to knock me off balance. Getting in the first time I walked in with another stroke survivor. We also had help for another guy in our group, one of only three that showed up. I thought that was sweet of him, since this was not a stroke group. It is just by chance that two of us ladies had a stroke. It also has given me hope that this other lady had found her new beau in the group and he is a non-stroke person. I am not necessarily looking for a non-stroke survivor guy. I just figured I need more options, greater numbers for greater chances to find someone. Back to the lake knocking me on my arse. It did. While walking back in the second time, I am not sure if I was more tired since I had been in the deep end, or if the waves were stronger. I was trying to be careful only taking a step at a time. The water was only halfway to my knees when I fell. I tried to stand back up between waves. I got knocked down again before I stood all the way up. That time it twisted my good knee. I sat there waiting for the pain to subside and partly wondering if I should ask the lifeguard for help. Meanwhile as I was sitting, the waves did not wait for me. They were strong enough to push my heavyweight forward. I felt like a beached whale. I did manage to get up and walk back to my towel. The moral of that story is it was only a tiny blip of time overall in my day. It will not stop me from swimming in waves again. It will not stop me from looking like a drunken fool (I had zero alcohol all day) walking on rocks or uneven sand.

While out swimming in the deep part, I saw an eagle fly by. This was my first time seeing an bald eagle that was not a zoo captive. Amazing. There were plenty of seagulls around too. This annoyed some people, but I like having them around.

Four of us stuck it out until the end then went to a nearby restaurant. It had a waterfront bay view. It was a very pleasant place. I was not too hungry, so I just ordered a flatbread pizza. The name on the menu was misleading, it was called fire and the sauce was sweet. Some of the other items were expensive, not overly but dining out was not in my budget for the day. Anyhow, we sat and talked for a long time and had a few laughs.